It has been pretty cold and snowy in Boone the past few days. And windy. And did I mention cold? We have been running from the house to the car to work, and back at the end of the day. We haven’t really been venturing out much because it’s cold, I’m lazy, and we don’t need anything. I am seriously stocked up on groceries for a while, and I did some cooking on Monday, so we haven’t even been tempted to eat out. It has been glorious!

Oh, did I tell you that I joined a co-op? I’ll save that discussion for another day, but I will say that it has changed my grocery shopping habits, which tend to get out of control.

Anyway, to the real point of this post … we discovered oatmeal this year. Not the packs of oatmeal you mix with water and microwave. Real oatmeal – that isn’t mushy and full of weird ingredients. We eat it almost everyday for breakfast, which is a big step because before ate chick-fil-a for breakfast a lot. Oatmeal is quick and easy to make. We make a big batch at the beginning of the week and eat on it for several days. It reheats really well. 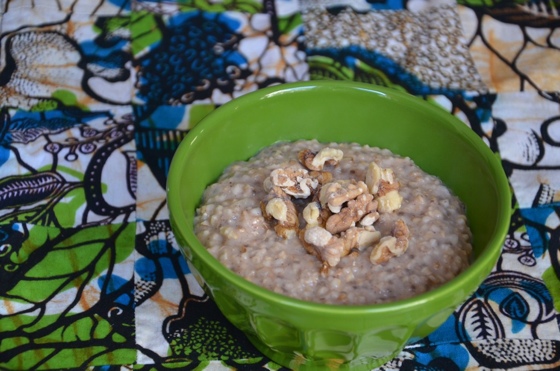 Oatmeal
*modified from Oh She Glows

Mix all ingredients, except for apple, syrup and walnuts in a pot and bring to a boil. Reduce heat to low and simmer for 15 minutes. Add apples and maple syrup to taste. Simmer for another 5 minutes. Served with toasted walnuts.

The nice thing about oatmeal is that you can alter it to suit your palate. Don’t like apples? Try substituting pears instead and add some cloves and nutmeg for a nice flavor. Try blueberries – frozen, fresh or dehydrated. Don’t have chia seeds? Cut down on the liquids, but get yourself some chia seeds. You can find them at a health foods store -Whole Foods and Earth Fare carry them. They offer the only complete source of protein in a vegetable form. They will help you have energy throughout the day. Don’t have almond milk? Use all water instead- it will be less creamy, but it will work. Haven’t used steel cut oats before? Get some. Don’t be afraid. You can find them in the bulk grains section of many grocery stores. Sometimes they can be found in cans in the breakfast cereal section, but they will be really expensive. I order from our co-op, and I was able to get 30 lbs for $1.06 per pound. I love steel cut oats because they don’t get mushy.

So, if you are looking for a healthy, filling breakfast recipe to comply with your New Years’ resolutions, look no farther.